A Writer Unpacks the Kavanaugh Hearings 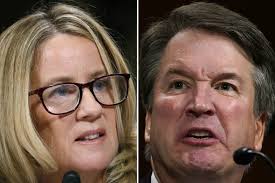 In some ways, Kavanaugh’s testimony was like every writer’s Shitty First Draft: there was true meaning buried in that mess, but it had yet to be exhumed.

As a writer, I do a lot of narrative packing and unpacking. Details that are simple, obvious, and relatively unimportant must be tightly packed, reduced in size and scale and number; otherwise they’ll take over the story and hijack its meaning. However, important scenes and situations deserve just the opposite treatment; they must be unpacked and carefully laid out so that significant perspectives, contradictions, and hidden insights can emerge from them. It’s not always easy to decide exactly which information to pack and which to unpack, but these choices are crucial, especially if we think of stories as chains of cause and effect wrapped around the truth.

I found myself thinking about this business of packing and unpacking narrative truth as I, along with some 20 million others, watched last month’s Senate Judiciary Committee hearings of Dr. Christine Blasey Ford and U.S. Supreme Court nominee Brett Kavanaugh. The Committee’s GOP leadership was clearly intent on packing the story of Kavanaugh’s alleged high school assault on Ford into a tidy She-said-He-said presentation that could be wrapped up and shelved by the following day, when the Committee was supposed to vote to send the nomination forward. The goal was to dispense with Ford’s narrative as irrelevant background information – the kind of material you’d skim right over to get to the really important stuff in a novel.

In Ford’s telling, however, her story refused to be diminished. From the start, she presented herself as a reliable narrator, authentic and intelligent, adult and composed. Not just any trauma survivor, she had three graduate degrees in medicine and psychology. She knew how to identify and unpack exactly what was most important in her story: what had happened to her not only in the room with Brett Kavanaugh when she was 15, but also over the next 36 years, as a consequence of that event.

Ford described being pushed into a bedroom and thrown down on the bed with Kavanaugh’s full weight grinding into her. She recalled the music, already playing in the room, being turned up as the teenaged Kavanaugh groped and yanked drunkenly at her clothes. She remembered his hand pressing over her mouth when she tried to scream and the fear not only that he would rape her but also that he might accidentally kill her when she couldn’t breathe.

And then there was the laughter. Seared into Dr. Ford’s memory was the sound of Kavanaugh and his buddy Mark Judge laughing “at my expense,” laughter that continued even after Judge jumped on top of them, knocking all three to the floor and enabling Ford to escape to the bathroom across the hall. “I heard Brett and Mark leave the bedroom laughing and loudly walk down the narrow stairs, pin-balling off the walls on the way down.”

Those precise, visceral details speak volumes about the boys’ mindset and condition. The repeated references to laughter underlined the sense of injustice that stayed with Ford for decades.

Next she unpacked the aftereffects of the assault, including the counseling session in 2012 when she named her attacker as Brett Kavanaugh and expressed her concern that he could some day be named to the Supreme Court. Ford’s testimony went on for hours. Across the country women, in particular, listened and wept. This wasn’t only because they could relate to her experience. Ford’s narrative moved total strangers also because the details she chose to unpack rang true and were deeply significant to the larger story of Brett Kavanaugh’s history and character.

Ford didn’t pretend to tell the whole story. She did not try to pack down or gloss over the details that she couldn’t remember. Instead she explained with expert authority why traumatic memory prevented her from remembering peripheral details. And she urged the Committee to interview the specific witnesses she’d named so that the rest of the critical scenes could be unpacked. As with most stories, more objective research was required before the final draft could be written. She welcomed a thorough FBI investigation.

Then it was Kavanaugh’s turn. Unlike Dr. Ford, this Supreme Court nominee presented himself as a quivering fireball of emotion. His voice shook. His nose twitched. His cheeks reddened. His eyes welled with tears of self-pity as he shouted blanket denials, deflections, and complaints of his own victimization — not by Ford but by Democrats. He decried the confirmation process as “a national disgrace.”

Instead of unpacking relevant memories and evidence that told a cohesive story of truth, Kavanaugh rambled about aspects of his past that a better storyteller would have packed into the background.

Instead of welcoming an objective investigation, he cited random high school friends and misrepresented their statements. He got simple facts wrong, such as the legal drinking age in Maryland, which wouldn’t have supported his case anyway. He offered absurdly whitewashed translations of the sexual code that accompanied his high school yearbook picture. Far from the logical, organized, and meticulously unpacked details of Ford’s narrative, the elements of Kavanaugh’s lengthy self-defense tumbled forth in a sloppy hodge-podge of evasions masquerading as the whole story.

In some ways, Kavanaugh’s testimony was like every writer’s Shitty First Draft: there was true meaning buried in that mess, but it had yet to be exhumed. The advice I give to students who are struggling with their own first drafts is to Interrogate the Weird. That’s because weirdness usually signals something that deserves to be unpacked.
There was plenty of Weird in Kavanaugh’s testimony.

His teary tangent about the calendars that his father started keeping in 1978 – when Brett was 13 – was as weird as the picture he drew of his family gathering around these calendars each Christmas to reminisce over the entries. Even more bizarrely, the calendar that he claimed to keep himself in response to his father’s example did not exonerate him, as he claimed, but instead presented the Committee with an entry that seemed to corroborate Dr. Ford’s testimony. If only he’d unpacked that!

Weirdest of all, however, were Kavanaugh’s thirty references to beer. “I drank beer with my friends. Almost everyone did. Sometimes I had too many beers. Sometimes others did. I liked beer. I still like beer. But I did not drink beer to the point of blacking out…”

As Shakespeare might have said, the man doth protest too much that he likes beer but never has abused it. Kavanaugh’s true design, however, oozed out in one telling line: “If every American who drinks beer or every American who drank beer in high school is suddenly presumed guilty of sexual assault, we’ll be [sic] an ugly new place in this country.” In other words, Kavanaugh was pivoting. Instead of unpacking details that would confirm him to be the kind of judicial hero who deserved to be a Supreme Court Justice, he chose to present himself as the King of Beer. In this new tale, all those millions of other American beer drinkers would immediately be accused of sexual assault if Brett Kavanaugh weren’t confirmed! The logic smacked of blackmail and turned like a faulty bottle cap, but it was delivered with the kind of righteous, melodramatic feeling usually reserved for tent revivals or soap operas.

Kavanaugh, in fact, seemed intent on substituting his feelings for narrative coherence. He reminded me of writers who give such impassioned public performances of their stories or poems that many in the audience don’t realize just how flawed the work really is.

Most Supreme Court nominees would prove their judicial temperament and integrity by packing their personal emotions into tightly controlled subtext while unpacking objective evidence of their impartiality and competence. Kavanaugh’s decision to do just the opposite suggests that he has no more respect for judicial precedent than he has for narrative coherence.

If the GOP senators on the Committee were writers, they’d have sent Kavanaugh back for a page-one rewrite and demanded the full investigation that Christine Blasey Ford had requested to complete her story and get to the truth of the nominee’s character. Instead they applauded their man’s histrionic performance and glorified his Shitty First Draft by confirming the King of Beer to a lifetime position on the highest court in the land.

But the senators who voted for Kavanaugh ignored the verdict of their audience. After the hearings, 45% of the American people believed  Ford (up from 32% ahead of the hearings), while only 33% believed Kavanaugh. The superior storyteller had left her mark, and millions vowed to punish the GOP in coming elections.

Writers, this is your cue to run for public office. We’ve never needed you more.