And have you read… Headwaters? 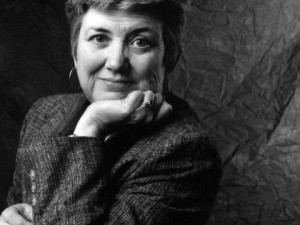 Have you ever wondered who began the low-residency MFAW Program at Goddard College, the first of its kind anywhere? Who spearheaded our progressive and oft-imitated curriculum?

Ellen grew up on her family’s farm in rural Virginia. She earned her BA from Converse College and MFA from the Iowa Writers’ Workshop. As a child, she studied piano, not turning to poetry until a friend in college introduced her to poetry. In an interview with Vermont Public Radio, she said that music influences her writing “entirely.”  “I primarily write by my ear. I write by sound first, and then I have to go back and … press on every word and figure out the structure of what is being said rather than how it’s being said, but there’s no question to me that sound is the generative force. … [Poetry] does its work through music which then allows for exploration of … complicated and therefore accurate feelings.”

Bryant Voigt was a founder of the Goddard College low-residency MFA program, the first MFA program of its kind, and has also taught at Iowa Wesleyan College and MIT. She served as poet laureate of Vermont for four years. She has received grants from the NEA and the Guggenheim Foundation, and in 2015 she was awarded a MacArthur fellowship. She has lived in Vermont for many years. Here is a segment from an interview she did with Granta magazine:

When reading your newest collection, Headwaters, I noticed the lack of punctuation in every poem, including in ‘Geese’, the poem in the latest issue of Granta. In your previous collections, there was already a sense of a quick and vital questioning – a breathlessness – and now, with this latest book, it feels as if that movement and feeling comes to the fore. Was this intentional? And how was it inspired?

If intent requires a conceptual plan in advance, then no; but the many parts of the brain don’t always reveal themselves to all the other parts. Nor is the poet a dependable source on the subject of inspiration! The biographical facts that seem pertinent to me: my most recent book had been a New and Selected Poems and a prose study of syntax; the first of those projects required a close look at all my previous work, which I think inevitably leads to a certain dissatisfaction and even impatience, and the second project opened another way to think about my own work. Meanwhile, I shouldn’t discount having my sixty-fifth birthday, which causes its own sort of impatience. After several years of idling – either silence, or more-of-the-same – I began a new poem that had a great deal of repetition, a great deal of descriptive excess, and multiple, very fast tonal shifts; somewhere around draft \#25, it occurred to me those shifts could happen more easily if I removed the syntactical markers – i.e., the conventional punctuation that helps ‘chunk’ the functional parts of an English sentence. This required me to think more carefully about how those markers might be implied rather than notated, and in turn freed the line to be the sole manager of pace and pause, moments of rest. And I found that very exciting – enough so to make a commitment to the protocol and its possibilities. So there is no punctuation at all in the new book.

Following on from this, you rely on the line break both for the music within the poetry and for linguistic impact – you often end on a rhyme, or the end of lines are working within or towards half or imperfect rhymes, rhymes which feel deftly weighted and intuitively crafted. As your rhymes can continue and evolve throughout the poems, these end words feel like anchors holding the balance for this. This stanza in ‘My Mother’ strikes me particularly:

Is this emphasis on line-breaks an unconscious focus in your writing, or an intentional one? And can you explain your process in regards to end-rhyme and line-breaks, and perhaps what else you believe might root the sounds within the poems?

We’ve developed the habit of referring to ‘line-breaks’ when examining free verse prosody, and it’s useful in the sense of a line ‘breaking’ or dividing or rechunking the sentence. But mainly, in composition, I think of making a line that has its own integrity as a rhythmic phrase. As I mentioned, without a comma or a period providing some kind of pause, the end of the line becomes the only moment of rest, but consistently ending lines where a natural syntactical chunk might also end is predictable and boring. Repetition, including the repeated syllable of rhyme also provides a tiny ‘rest’ – we’re snagged for a moment on the recurring or chiming sound. When that happens within the line as well, not just at the end, I hope what is subverted is any sense of a predictable pattern for those repetitions.

As well as this idea of a corrupted rhyme, the metre of the poems feels disturbed: stretched at times, crippled at points and extended beyond comfort at others. Do you feel as though this disturbance works within or towards a complete, expected rhythm?

Pattern is repetition occurring with sufficient regularity to create an expectation for it. And any art requires both pattern and variation, wouldn’t you agree? Whether it’s painting or dance or poetry, all pattern with no variation lacks energy, but NO pattern would replicate chaos and incoherence. So I’d vote for a ‘complete’ overall sense of rhythm, or pulse, without it being necessarily ‘expected’. That is to say, with metric as with rhyme: these poems are much more committed to asymmetry and surprise than to the Apollonian virtues of order and certainty. I hope the same is true for their overall structures as well – how they move and develop down the page.

We are deeply indebted to Ellen Bryant Voight for the legacy of our program at Goddard College, and send our warm congratulations to her on the winning of this award. The Writer remembers following her around as an undergraduate student, listening to every word she said whenever she was on campus for a residency, attending every reading, and wondering how her pal, Louise Gluck, could stand walking through the snow in stilettos.