packing up my summer book: 20 lines

The rock I believe is from a trip last Winter, between semesters—and while I was off from Goddard—to California, Malibu, maybe. I want it to be because as we were driving in the car yesterday, me preparing to write a letter once we arrived, as part of being back at Goddard, we were listening to Miley. We were not just on vacation in California, when the road we drove to Big Sur had not yet washed out, but needing to heal, and I was between the Airbnb airstream and other destinations attempting an afterword. No matter how many times and how closely I had gone over the galley, I still find the typo in one of the two opening epigraphs, when finished books arrive recently. Note to self to remember to check next time there just as well, so it does not happen again. I think of Georges Perec, Oulipo, A Void, and could construct 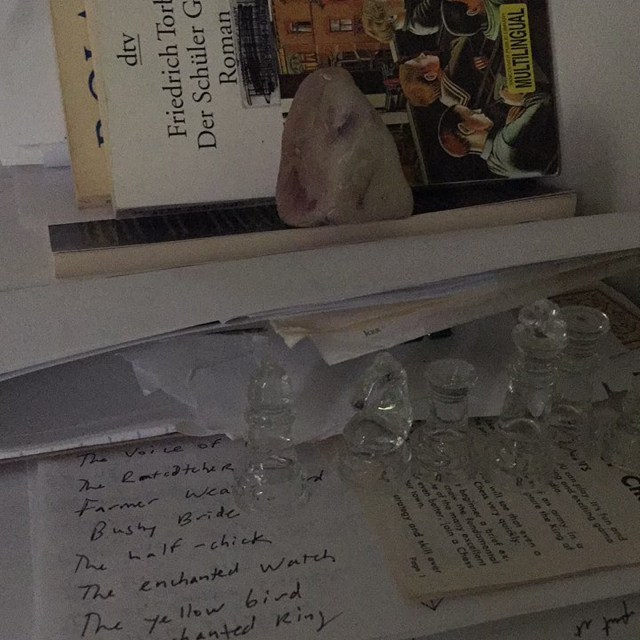 At some point I will continue on, but I have other goals here, specifications to meet. I am thinking of Perec, also Matthews

as he left in one form this realm, because of a thesis and a class. There is a stack of summer books on the floor still to return to the library, that have reached their renewal limit, overdue. One idea I had for the book I have been writing too long was to map it into each of the districts of the place the originating author I am translating from comes from. Daniel Glattauer’s Love Virtually takes place in the form of email exchanges that start a story by chance. A Manet catalog (through my desk window, the outdoor shower) text by Bataille; I felt tugged to hear before Miley that S-Town’s John B. included him in the list of who he had read, his church. The Eliot complete I removed wanting to follow up on learning he had gone by “Possum” for some. Oprah’s 2015 Book Club selection. The Isherwood diaries I was going to use to write a sestina but also got because Chris Kraus mentioned him glowingly. An introduction to Psychoanalytic Theory to read more about Brian Massumi. Joy Williams’s ninety-nine stories of God and a study of Dr. Suess as American Icon. Lastly, Proxies: “When I started teaching at…it coincided with my breakup with….” No longer an ingénue, but …years…in and out of an often maddening, fiercely supportive, loving relationship…

Douglas A. Martin is the author most recently of a novel, Once You Go Back (Seven Stories Press), nominated for a Lambda Award in the Gay Memoir/Biography category and recorded as an Audibletitle. His other books include: Branwell, a novel of the Brontë brother (Ferro-Grumley Award finalist); They Change the Subject, a book of stories (including Pushcart Prize nominated “An Escort”) named one of the Top Ten Books of the Year in the San Francisco Bay Times; and In the Time of Assignments, a collection of poetry. He is also a co-author with friends of the haiku year. His first book of prose, Outline of My Lover, was named an International Book of the Year in The Times Literary Supplement and adapted in part by The Forsythe Company for the live film ballet “Kammer/Kammer.” His work has been translated into Italian, Japanese, and Portuguese. As a critic, his pieces have appeared in such volumes as Anne Carson: Ecstatic Lyre and Biting the Error: Forty Writers Explore Narrative. Raised in Georgia, he now lives in New York and divides time between Brooklyn and upstate.