And have you read… Guardians? 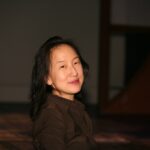 Guardians, the final installation in the young adult trilogy written by Susan Kim and Laurence Klavan, is coming out in paperback from HarperTeen later this month.

TW:   What was the inspiration for the story?

Laurence and I watch a lot of old movies and had originally conceived of this as a kind of post-apocalyptic Western: a tale of good and evil played out in an unforgiving landscape, with scant resources and the potential for explosive growth. The exciting thing about writing speculative fiction is that you can (in fact, I don’t think there’s much choice) infuse it with your greatest fears and anxieties, as well as your favorite tropes. So by starting with a fairly simple story of a single good person with allies and enemies, we were able to touch on practically everything we care about, both big and little: not only collective action, power, corruption, discrimination, and notions of utopia, but also books, cats, and most importantly, girl heroes.

TW:    Where did you “find” the main characters?

I’m not really sure where characters ever come from. In our trilogy, a few are lightly based at different times on traits Laurence and I actually have, would like to have, or fear we have: but they are also rooted in all the people we’ve ever known over a lifetime, both real and fictional. I think Stephen Sondheim once said that in order to write, one needs to possess a good imagination, the power of observation, or rich life experience: ideally all three, but certainly at least one. That sums up how I’ve always created characters: using a bit of each.

TW:   What did you do when the going got rough?

I’ve always worked best with deadlines and I’m pretty disciplined. Writing three novels in three years meant we had to adhere to a strict schedule: eight pages each in, say, four days. On top of teaching at Goddard, I also work as a children’s TV writer and story editor… so much of this had to be done on top of a full day at an office. As for rough patches, I’ve always known that everything I write is pretty crappy at least for a few drafts; so it’s not that hard to force myself to generate pages. And revisions are relatively fun. Sure, there will always be bad days. But I’m a big believer in restorative breaks: going for a walk or better yet, going to the gym for 45 minutes is the best way I know to calm down, gain perspective, and clear one’s head.