On Trump Protests: You Never Know What You’ll Get to Be Grateful For 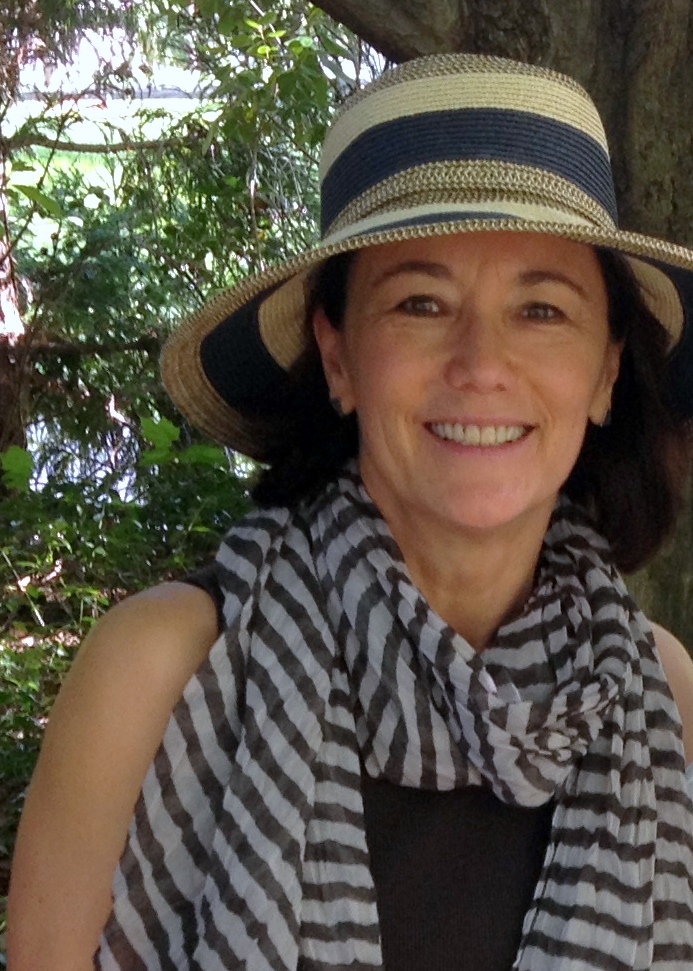 “You never know what you’ll get to be grateful for.” That’s what Carolyn would have said, had she lived to see the waves of protests marching across America since Donald Trump’s inauguration.

Carolyn Hall Young was my best friend.  She died on Friday, December 23, just four weeks before those outpourings of civic engagement began. 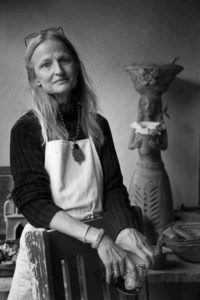 To call her my best friend, though, is to narrow-cast Carolyn’s influence. She really was my guide through life (as she was for most who knew her). In high school, her passion for the creative process showed me that a cake could be an expression of love, artistry, and delight – and not merely calories, as I’d trained myself to think. In college, I followed Carolyn’s example and became a painter – until I learned the lesson of authenticity that she embodied. Then I shifted to writing, because that was the art form that truly ignited my own creative passions. After college, when Carolyn was diagnosed with late-stage lymphoma, my learning curve steepened wildly as I struggled to keep up with the new expressions of grace and wisdom that she offered daily.

Soon after she was diagnosed, she and her husband moved to a little town outside of Santa Fe, where they bought a four-acre ranch, rebuilt a dilapidated 160-year-old adobe farmhouse, planted gardens and transformed their life to include four horses, cats, dogs, and a rural community that bore no resemblance either to the urban culture they’d left behind in Phoenix or to suburban Greenwich, Connecticut, where Carolyn and I grew up.

Most of this transformation they accomplished with their own hands, aided by their neighbors. And today the walls are crowded with paintings that reflect this remade life. A coffee cup beams with light in one of Carolyn’s canvasses. Her late white steed Terbay grazes in another. Three pears glow in a pottery plate, and serape-draped chairs under the New Mexican sky fill several panels. The presence of the woman who filled the cup, nurtured (and was nurtured by) the horse, grew the pears, and occupied those chairs is as palpable as the hand, eye, and heart that created these paintings.

“You never know what you’ll get to be grateful for,” became Carolyn’s mantra in response to the multiple rounds of high-dose chemo and any number of other treatments, experiments, and ordeals that caused indescribable suffering and helped her stay “on this planet” far longer than anyone could have predicted.

“You just never know,” she’d say. “That moment may be horrible, but you’ve got to give thanks first and ask questions later.”

In her final years she was confined to bed, but – thanks to her trusty iPad Air 2 — that didn’t slow her down. Using a multitude of mobile art tools and apps — often beta testing them for their creators — Carolyn produced more than sixteen hundred iPad portraits as gifts for friends and acquaintances around the globe, many of whom she’d never physically met. Even though she herself couldn’t travel, her work flew far, winning awards in mobile digital art competitions from Kansas City to Florence, Italy.

Carolyn’s lymphoma eventually metastasized throughout her body, spinning off secondary and tertiary cancers. Much of what she experienced was so excruciating to hear described, I lacked the courage even to imagine what it must have been to endure. Treatment turned her body into a nuclear war zone and toxic pinball machine, rolled into one. And yet Carolyn relied on her mantra, “You never know what you’ll get to be grateful for,” to help her locate the new lesson, the unforeseen kernel of strength, the discovery of wonder within the misery, as well as in her sustaining joy of life.

For almost as long as she lived with cancer Carolyn peer counseled other seriously ill patients. Many of them didn’t make it. “And when someone dies,” she’d say, “I want to throw myself on the floor and wail. I want to scream and swear.” Sometimes she did just that, but then she turned to her box of rubber blocks and started carving four-letter words backwards and reversed, preparing to turn negative space into positive imprints. LOVE was one of those four-letter words, along with HOPE, GOOD, RISK, LIFE, CARE, GIVE, HOLD, and FEEL. Backwards and reversed, the process itself became a metaphor for her emotions in grief. But then, as she pressed those carved-out ink blocks into the paper, the letters would emerge as if formed by light, restored to their desired order and form. She then sent these printed messages of mercy to the families who’d lost the person they loved. And it helped.

Carolyn’s spirit was in every respect the opposite of Donald Trump’s self-centered grandiosity. She was proud to vote against him, and she would have been appalled and deeply saddened by the wanton brutality with which he has seized the highest office in our Republic. At the same time, I keep reminding myself, she would have searched high and low for something in this chaotic sea change to be grateful for.

She certainly would have rejoiced, as I did, at the Women’s Marches, where millions of women and many good men demonstrated peacefully and loudly and in stunning unity against the new administration’s stated intentions to gut equal rights, healthcare, education, immigration, public housing, and the environment. Carolyn would have loved painting that seemingly endless panorama of pink pussyhats. And she would have marveled at the consistency of the marches as they circled the globe; as if we all were participating in the same demonstration, whether we were in Los Angeles or Berlin, New York or Sydney, DC or Accra. Everyone who took part seemed to feel the same groundswell of love and determination, the same conviction that peaceful activism could overrule the hateful rhetoric and secret ambitions of Donald Trump, Steve Bannon, and the rest of their inner circle. Carolyn would have embraced that groundswell of emotion as a big “something” to feel grateful for.

She also would have been glad to see how the Trump administration has galvanized a new generation of activists to stand up and engage politically for the first time. Carolyn and I came of age in the 60s, and the demonstrations of our era helped to define and direct our values and our goals for life. That shaping seemed a mighty small thing next to the lives lost in the fight for civil rights and the pointless carnage in Vietnam, but still, it was something to be grateful for. And millions today are experiencing a similar something, as groups as varied as WritersResist, 100 Days Action, and the Birch Reincliff artists collective all demonstrate.

The gem that shimmers inside Carolyn’s mantra is the fact (and not an “alternative fact”) that nothing is purely good, or purely bad. Not even having cancer. Not even the Trump presidency.

Contrary to the Manichean ideology that drives Trump and Bannon to divide the world categorically – and dangerously — into “good guys” and “bad hombres,” humanity and the human experience are inherently nuanced. Misguidedness can look an awful lot like evil, but it’s much more complicated than that. Arrogance can too easily be mistaken for strength, though it generally masks a host of weaknesses. And celebrity, in our culture, is increasingly passing for goodness, when it’s really a numbers game. Too many of us reflexively label people good or bad without any knowledge of what they are actually doing or saying. Then those dubious labels, rather than factual information, guide our reactions to those people forever after. [This effect persists because of a human tendency toward confirmation bias, but that’s for another post.]

Carolyn would have searched for Donald Trump’s better nature and only given up her search if convinced he suffered from a serious mental illness (which would make him not evil, but sick, and therefore deserving of compassion). In the meantime, she would have remained alert to all the lessons his administration is offering us about the need for an informed electorate; the responsibility of artists and writers to speak truth to power; our untapped potential for community action; the vitality and responsiveness of our democracy; the essential role of a free press; the caring concern and generosity of the vast majority of Americans. She would have felt deep gratitude for the resilience of the U.S. Constitution. And she would have shared unbridled joy with and for the millions who are coming together, despite our different races and creeds and backgrounds, to defend the country and planet we love.

For all of that, however, Carolyn was no Pollyanna. She knew all about opposition. As long as she could moderate or contain her cancers, she could thrive in spite of them and find much to be grateful for.  But that meant standing up to the pain and threat of defeat on an ongoing basis. Carolyn knew she had to resist, as well as meditate. Her campaign for life and love required intense awareness, as well as equanimity. It took heroic strength, as well as empathy.

Many of Carolyn’s doctors thought her disease would defeat her 30 years ago. She defied the odds and accomplished far more while waging life each day than most healthy people I know. So her example continues to guide me. 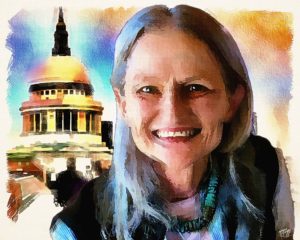 We can defend what we most value and live fully at the same time. To do so, we need to remain vigilant, yet open, and never give in to fear or despair. We must take each day as it comes and, however bleak the moment seems, remember to cultivate sources of joy and love and connection. Especially as creative souls, we must stay attuned to beauty and exercise compassion as intentionally as we do our craft.

The rewards may not come easily. They may not be obvious. But they have the power to transform our country, our future, and our selves.

What are your four-letter words for hope? For love? For life?

This speech was delivered Saturday afternoon, February 11th, in Port Townsend at the start of the Spring 2017 Residency.