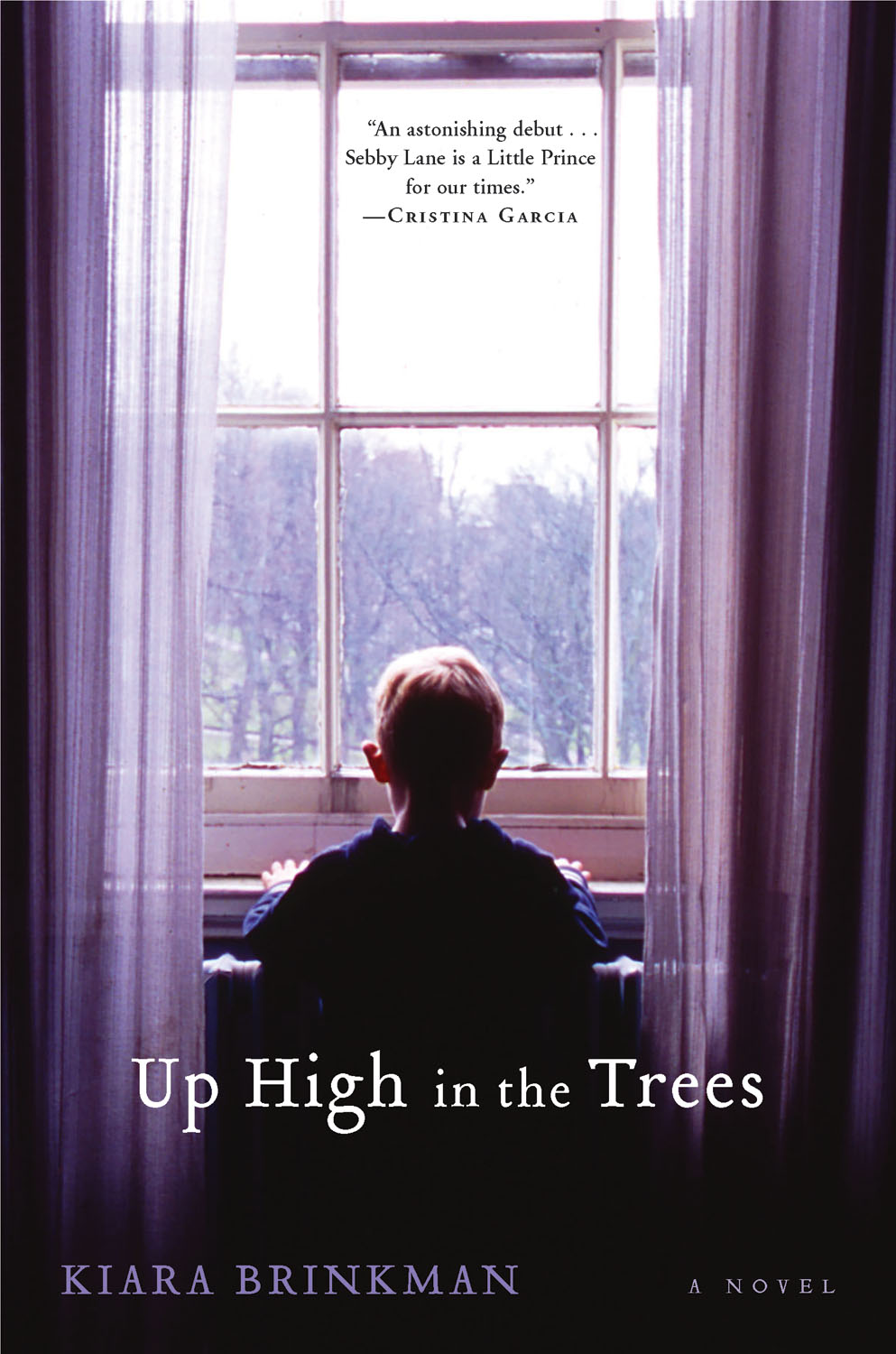 Published to stellar critical acclaim in hardcover, Kiara Brinkman’s exquisite debut novel about a family in turmoil, as told in the deeply affecting voice of one extraordinary eight-year-old boy, is now in paperback.

All who know young Sebby Lane understand that he is an unusual child in many respects—that he experiences the world around him more vividly than most, a condition that only intensifies after the death of his best friend: his mother. Sebby misses her so acutely that he begins to dream and even relive moments of her life. When Sebby’s father decides to take Sebby to live in the family’s summerhouse, he hopes it will give them both the time and space they need to recover. But Sebby’s father deteriorates in this new isolation, leaving Sebby to come to terms with his mother’s death alone as he wonders if he, too, is meant to share her fate.

In spare and fierce prose buoyed by the life force of its small, fearless narrator, Up High in the Trees introduces an astonishingly fresh and powerful literary voice.

“Like Faulkner’s Benjy (The Sound and the Fury), Sebastian is most unusual for the lyrical intensity of his inner life, and the strongest impression this fine debut leaves is his nicely achieved voice, which is moving without being precious.”

“A very moving and perfectly convincing evocation of the inner life of an unusual boy. . . . Brinkman’s portrait of Sebby and his family is humane and uncompromising, never maudlin, and, in the end, we root for Sebby as if he were our own.”

“[An] inventive, emotionally arresting debut . . . Sebby Lane will break your heart and delight your soul.”

Kiara Brinkman graduated from Goddard’s low residency MFA in Creative Writing Program in 2006.  Brinkman says that her time at Goddard College was an important part of the creation of the novel: “At Goddard I gained the confidence to make writing a top priority in my life, and I established the necessary momentum to get into a rhythm and move forward with my work. My advisors were encouraging and my peers were supportive, and at a certain point, I realized that I was doing exactly what I wanted to be doing – I was writing a novel and feeling good about it, and no matter what, I was going to finish.  I also learned how to be productive. I figured out a writing schedule that works for me, which I think is a big part of the struggle, learning when and how long to sit in front of the computer— and it’s different for every writer.” Kiara took time between stops on a busy book tour to talk with faculty member Jeanne Mackin about her time at Goddard, the success of this first novel, and her life as a writer.

JM: Why did you choose Goddard’s low-residency program?

KB: I’d taken a lot of writing workshops as an undergrad at Brown, and while that was great for me at the time, I wanted to have a different experience as a graduate student. At Goddard, I mainly worked one-on-one with my advisor, and I benefited from the intensity and continuity of that communication throughout a semester. And because low-residency programs tend to draw a more diverse group of students, during my time on campus, I was around writers of all ages and backgrounds, which was exciting.

JM: Has success changed the way you approach your work as a writer?

KB: It’s always nice to have a lot of years of hard work validated by the outside world. You spend so much time by yourself in a little office. It’s nice to be heard. It was exciting going on a book tour; this is what I have always wanted, my dream come true. The flipside is that I’ve put a lot of pressure on myself; now I need to keep writing and keep getting better. I need to appreciate the success but not get stuck in it.

JM: You took tremendous risks with this novel. The Washington Post says “no one could blame you for turning away…but if you can bear it, the treasures here are exquisite.” Why and how did you choose such a risky character, an Asperger’s afflicted young boy who has lost his mother?

KB: I had this character’s voice in my head for a long time, before I even understood his condition. After college I worked in an after school program and one of our students had Asperger’s. That kind of gave me a framework for the voice. Usually what comes to me first is the character’s voice…once I have a few sentences I feel very comfortable with a character who is older, younger, or a different gender. For Sebby (Sebastian, the young narrator of the novel), the challenging thing was to convey complicated ideas in simple ways. I took the risks I did because the character inspired me to do that. I wanted to be true to him and his voice and tell the story in his way, yet I had to figure out a way to imply things so that the reader wouldn’t get frustrated.

Inhabiting this character for a couple of years did affect me personally. It was very intense. In the middle of a project I carry it around with me, even trying to experience the world as the character might. Writing this character turned up the volume on my own emotions. The world become brighter, more vivid, but could also be overwhelming. When I got stuck, I would take a break for a couple of weeks. My own brain needed a change. I got very attached to Sebby and had to write him into a place where I felt he would be safe, so it was important to end the book on a hopeful note.

JM: What was your path to the writer’s life? What keeps you coming back to the work?

KB: In trying to answer this question, I often end up telling my life story, which is not all that interesting, so I’ll try to be brief. I’ve always had a thing for words—how they sound and how they work together. I wrote weird little stories when I was a kid, and then, in high school, I tried journalism and completely burned out. I remember lots of tight deadlines and not liking what I was writing about or how I was writing. I felt like a hack. Then in college, I had the opportunity to take creative writing classes, and while I was finding it difficult to write my academic papers, writing stories came more easily for me. I was in a workshop almost every semester, and I knew I’d found what I wanted to do. The hard part was, and still is, sticking with it, and putting in the hours it takes to write and get better and just keep writing.

I don’t think writing is even a choice anymore. I write because when a story or a chapter comes together, I feel like I’ve suddenly arrived at a new place, a place where I didn’t even know I was going. I surprise myself. I communicate something that I don’t think I would be able to in any other way.

And, in my own life, I’m the kind of person who has trouble really enjoying and being in a given moment. Writing slows me down and forces me to be there, to fully experience every little thing. Of course, I also write with the hope that I’ll be able to create something that resonates with others and is helpful in some way.

JM: What books have most influenced you?

KB: I’ve read the first hundred pages of James Joyce’s A Portrait of the Artist as a Young Man many, many times. I find Joyce’s writing so immediate and emotionally raw— it’s difficult to see above or around it. He so firmly places you in the character’s shoes that the narration becomes almost claustrophobic, the voice sort of becomes a part of you, something that you hear aloud in your head as you read. I also often go back to Faulkner’s The Sound and the Fury, particularly Benjy’s narration. The rhythm of Benjy’s voice is so powerful, and you can exist in this world where time runs together— there’s no past, present, future. And, I read a lot of contemporary fiction. I know this may seem like a bit of a contrast after just mentioning Faulkner, but I’m a big fan of minimalist writing. I love Amy Hempel, AM Homes, Selah Saterstrom. 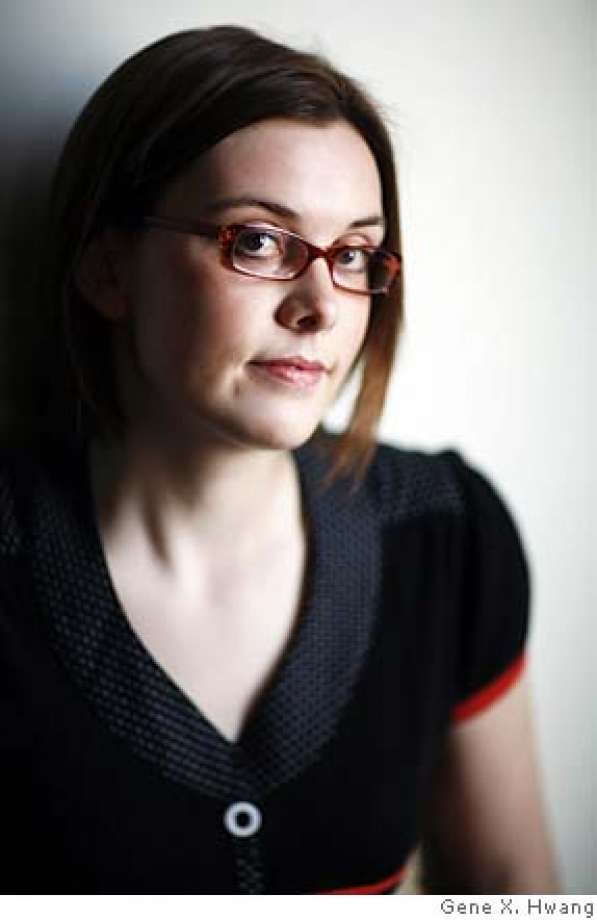 Kiara Brinkman‘s writing has been published in McSweeney’s, One Story, and Failbetter.com. Her novel, Up High in the Trees, was a New York Times Book Review Editors’ Choice and a Chicago Tribune Favorite Book of 2007. Lucy in the Sky, her first comic, will be published by Macmillan in 20121